The RDS was looking stunning for the arrival of UXDX Conf on the Dublin scene. By genius or by co-incidence the organisers had picked a day on which the schools were off, making for a pleasant low-traffic commute. As you would expect, the registration process was smooth ( and exhibited good UX :) and the coffee kicked the cobwebs off any latent sleepiness hanging around. Here are some moments from the first half of the day, far from a comprehensive roundup. Any talks excluded were simply victims of resourcing constraints, whilst trying to write this up on the day. 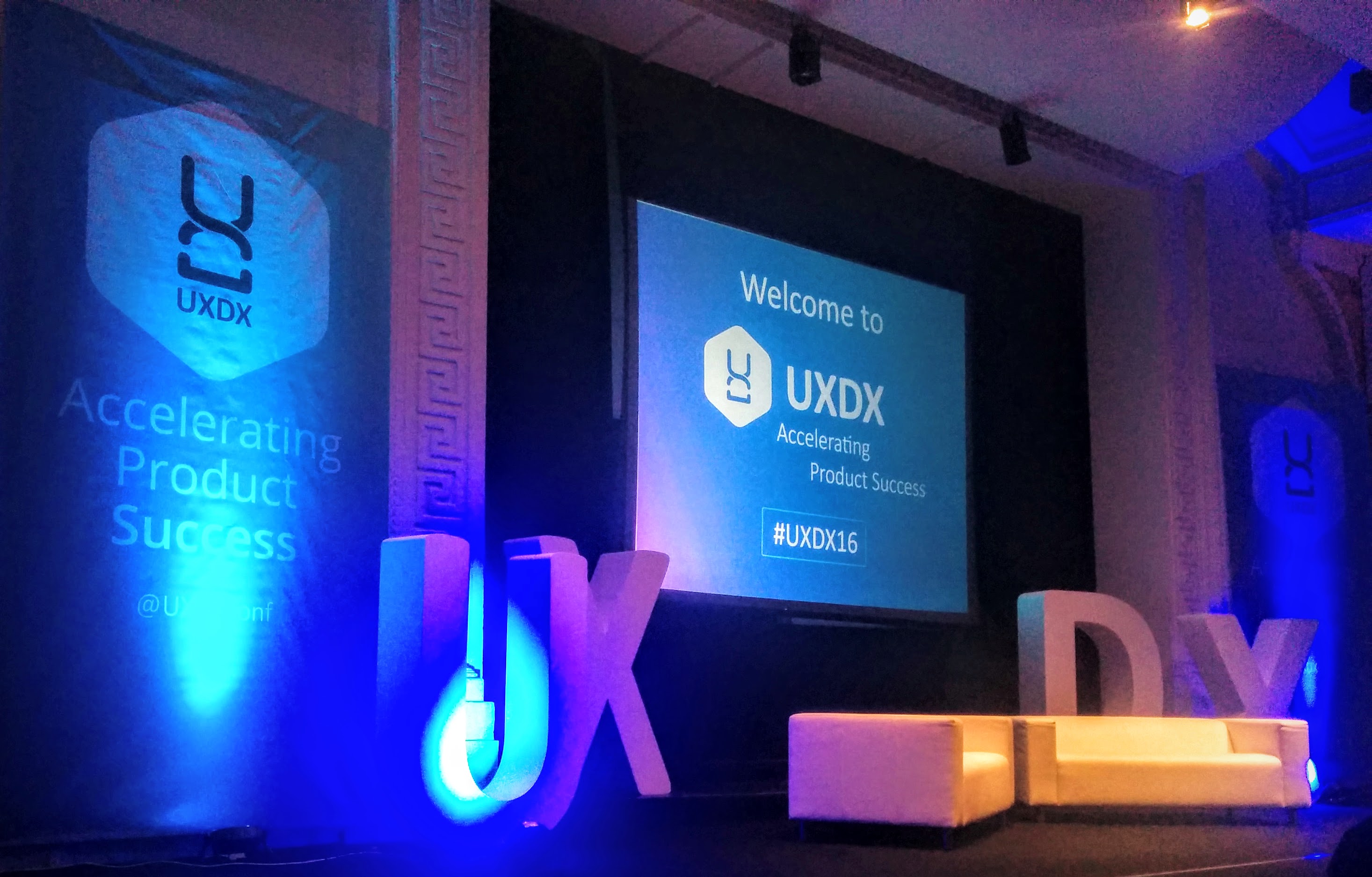 Douglas Powell, Design Principal at IBM got the day off to a positive start…

"This is an amazing time to be a designer."

Douglas expanded on why by outlining the increasing count of designers that are now involved as VCs, the number of design students in China, and the design course that’s been plotted by industry ever since 2007 and the arrival of the iPhone. A significant subset of people arriving to UXDX are probably feeling their way in design, perhaps coming from different backgrounds, and Douglas had plenty of advice for them. In particular, he pointed anyone not familiar with the work of John Maeda towards the #designintech report, a crucial resource to help keep abreast of some of the latest design thinking. Here is the 2016 edition. 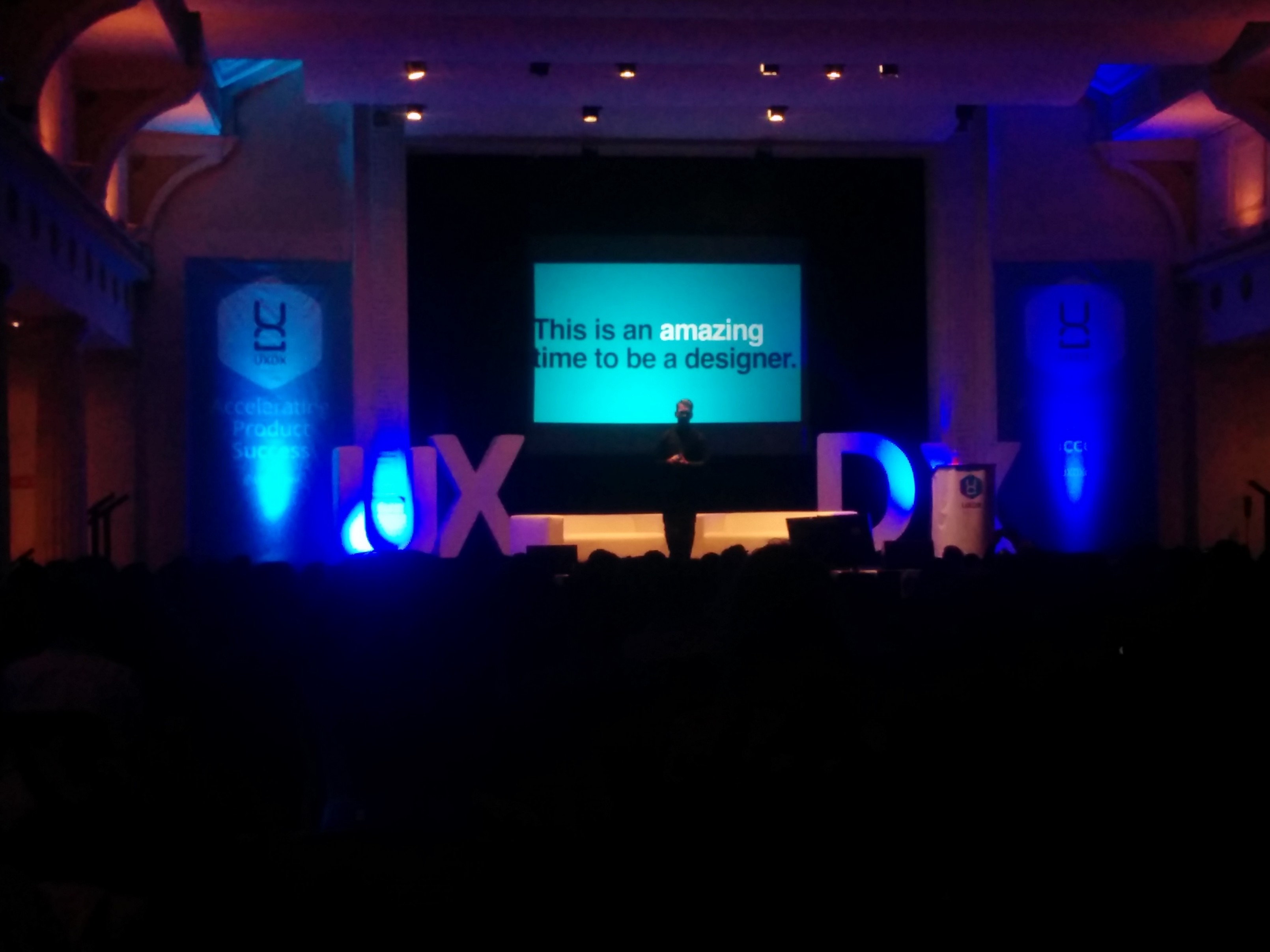 Douglas talked about the importance of diversity in the product team in order to build teams capable of arriving at great designs. He filled us in on some headline figures, including IBM’s ratio of designers to developers, which has evolved over the years from 1:33 to 1:8. And he closed his session by stressing the importance of empathy within your team as well as within the design process itself…

"Empathy, first with each other then with our user."

Another one of the mornings talks was by Rasmus Skjoldan, Lead Product Manager of Magnolia CMS. He challenged certain mantras such as “Rapid Prototyping is always awesome”, warning of the danger of taking this too far. While good for early feedback, it can lead to teams prematurely narrowing down the breath of potential solutions in a rush to get a product to market. He noted the fashion industry’s approach to mitigating this by baking multiple trends and ideas into a single concept car or piece of haute couture - ie. a deliberately unsellable product. From here, distinct lines of sellable products can be then developed.

… and she posed the question of whether UX could change the world. This was a talk littered with feel good moments. She outlined the positive effects of the Estonian government’s declaration of access to Internet being a fundamental human right and how UX can improve the experience of migrants by simplifying processes. 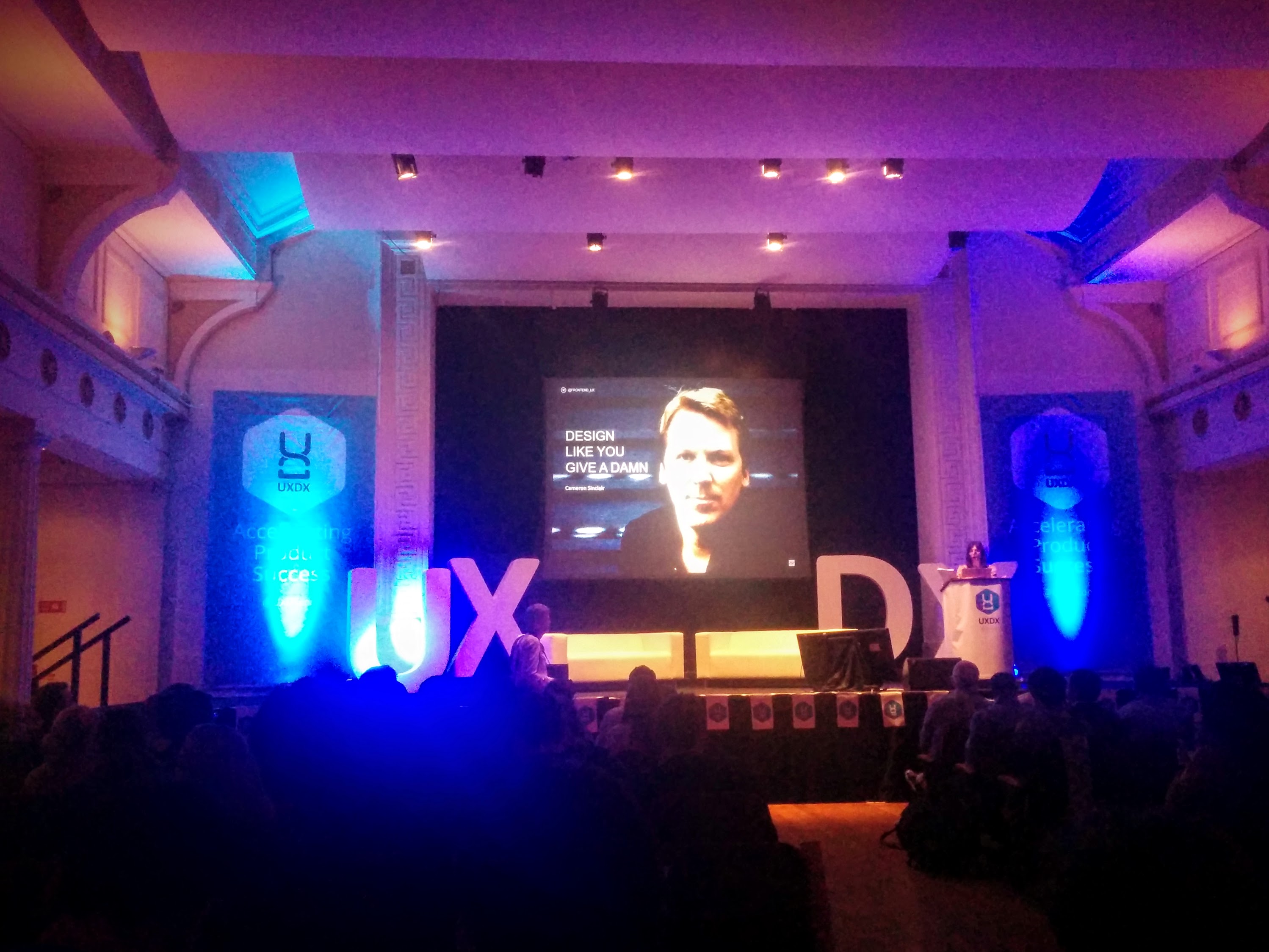 Adrian Trenaman, SVP Engineering at HBC Digital/GILT gave a very entertaining talk on organising multi-discipline teams and how this evolved over time at GILT. Early on, they realised that to create autonomous teams they needed to…

“Give engineers a problem, not a solution.”

… and look to make engineers “agents of change”. These autonomous teams followed a KPI driven development process to ensure they were on the right track. But they found that, initially, autonomous teams would be struck with stage fright soon after having taken control of the steering wheel. And they invested considerable effort in correcting this.

In these solutions, Adrian frequently offered contrarian viewpoints. He took a Peter Drucker quote “Culture eats strategy for breakfast” and added his own twist… 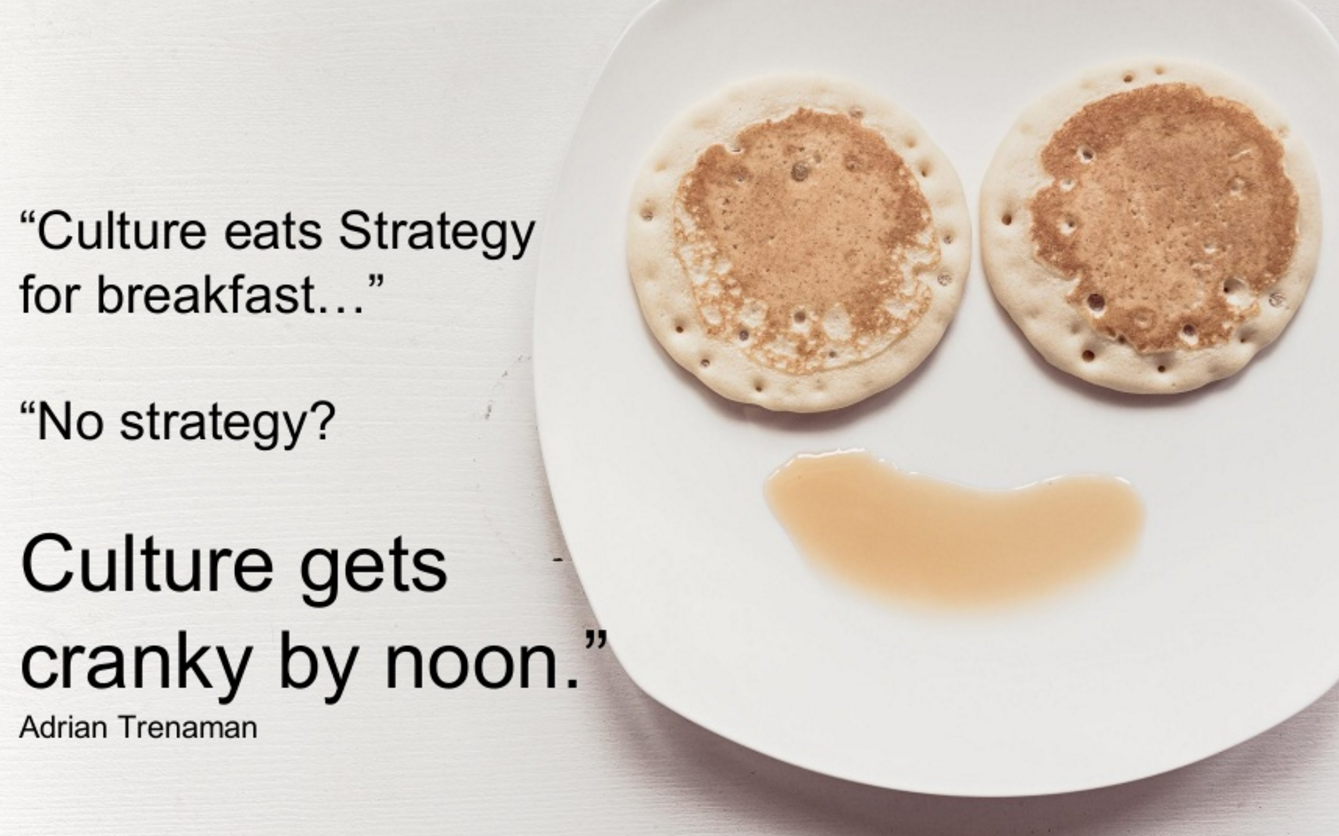 … as well as noting that…

“Great culture is necessary but not sufficient.”

Adrian continued to put the controversial cat amongst the pigeons, promoting a “code first” then ask questions later approach to evolving a solution, as well as not being afraid to back away from the data driven approach in favour of empathy. He also praised the technique of using a Gantt-like chart for planning out 90 day windows. And rather than dividing up the design team and permanently embedding them within development teams, they kept this “spiritual brotherhood“ together. Breaking them apart would not have been good for a team which loved working together as a unit.

For the motivation of all the teams within the organisation, Adrian cited 3 crucial factors: autonomy, mastery and purpose. These three factors would be echoed by David O’Donoghue, Head of Engineering at Zalando, later on in the day so this trio likely deserve careful attention. They were originally put forward in a talk by Daniel Pink available here when researchers observed how teams tackled the Candle Problem.

Finally, Adrian signed off with a tremendous set of values… 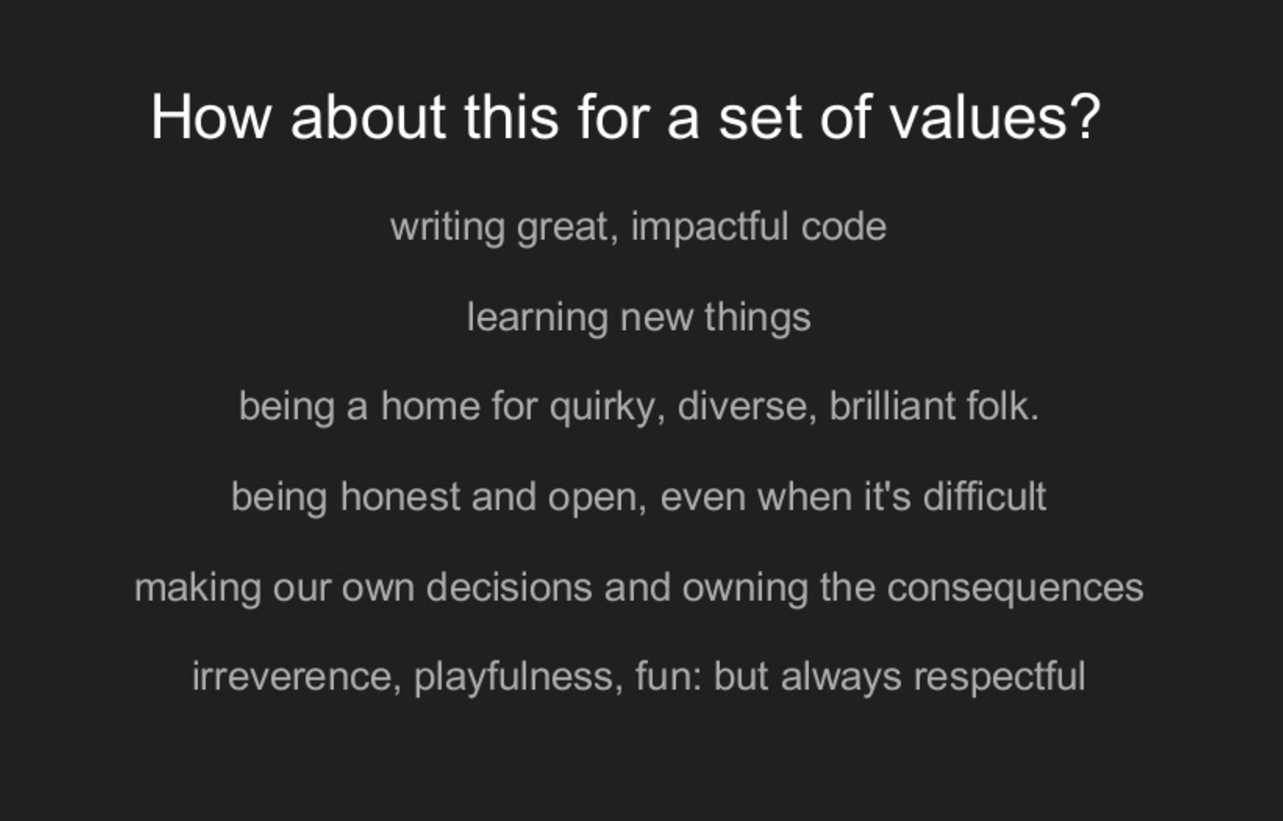 Adrian’s slides are available online and well worth a look.

Next up, Travis George, a Gaming Industry Product Specialist talked about Designs that Resonate. 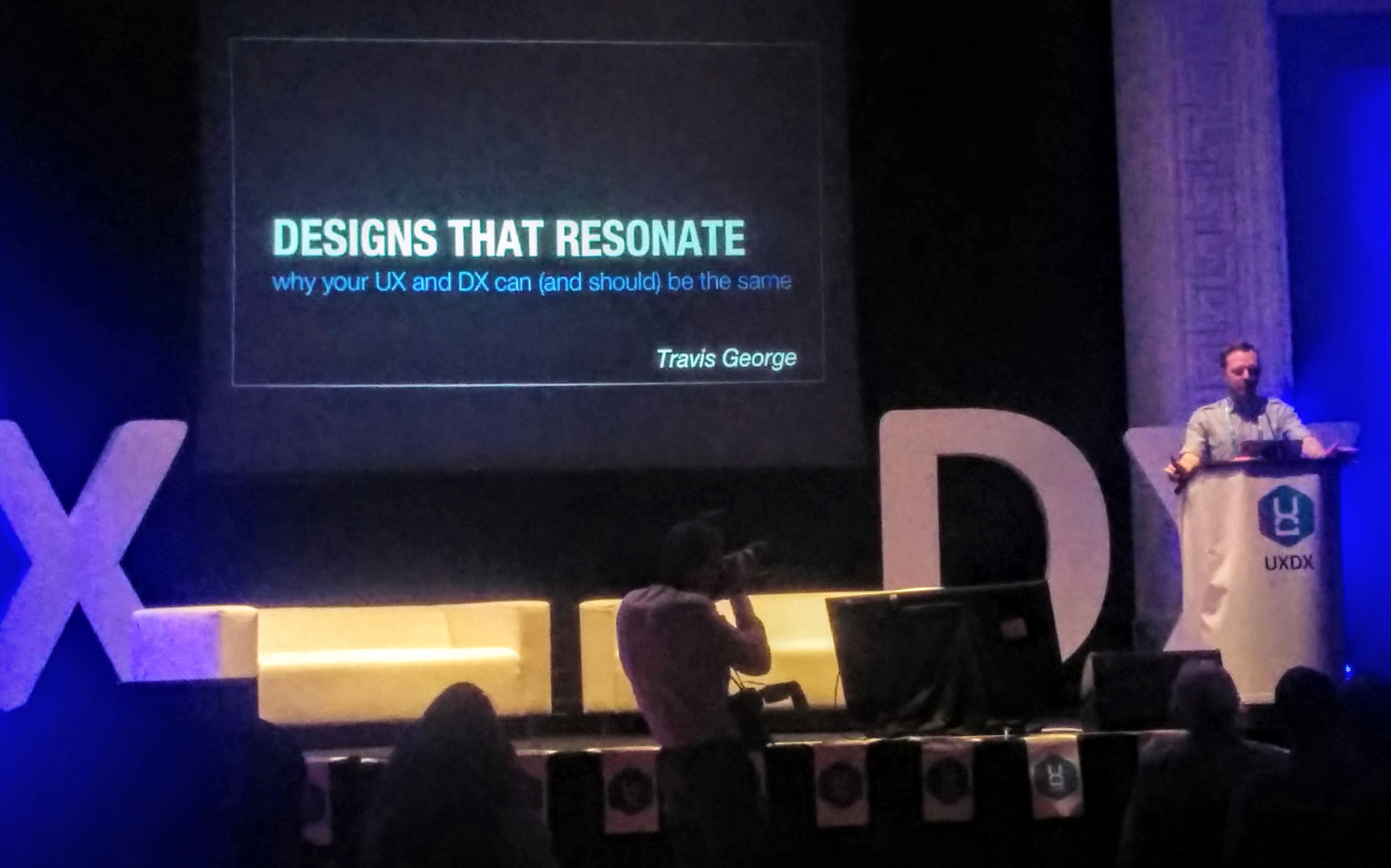 He expanded on this by saying products with resonance are those that make you feel like the product was made just for you. He warned that great products are not just about smooth user flows, they are about making a connection. His talk focused on ensuring that your product/development team really feels the same way as the end users about the game or product being built…

"Sympathy is not the same as empathy."

There were many more talks to follow and unfortunately we didn’t have the bandwidth to try and capture them all. Many thanks to the organisers - especially Catherine and Rory - for organising the event, and it will be interesting to see where UXDX goes from here. No pressure! :-) 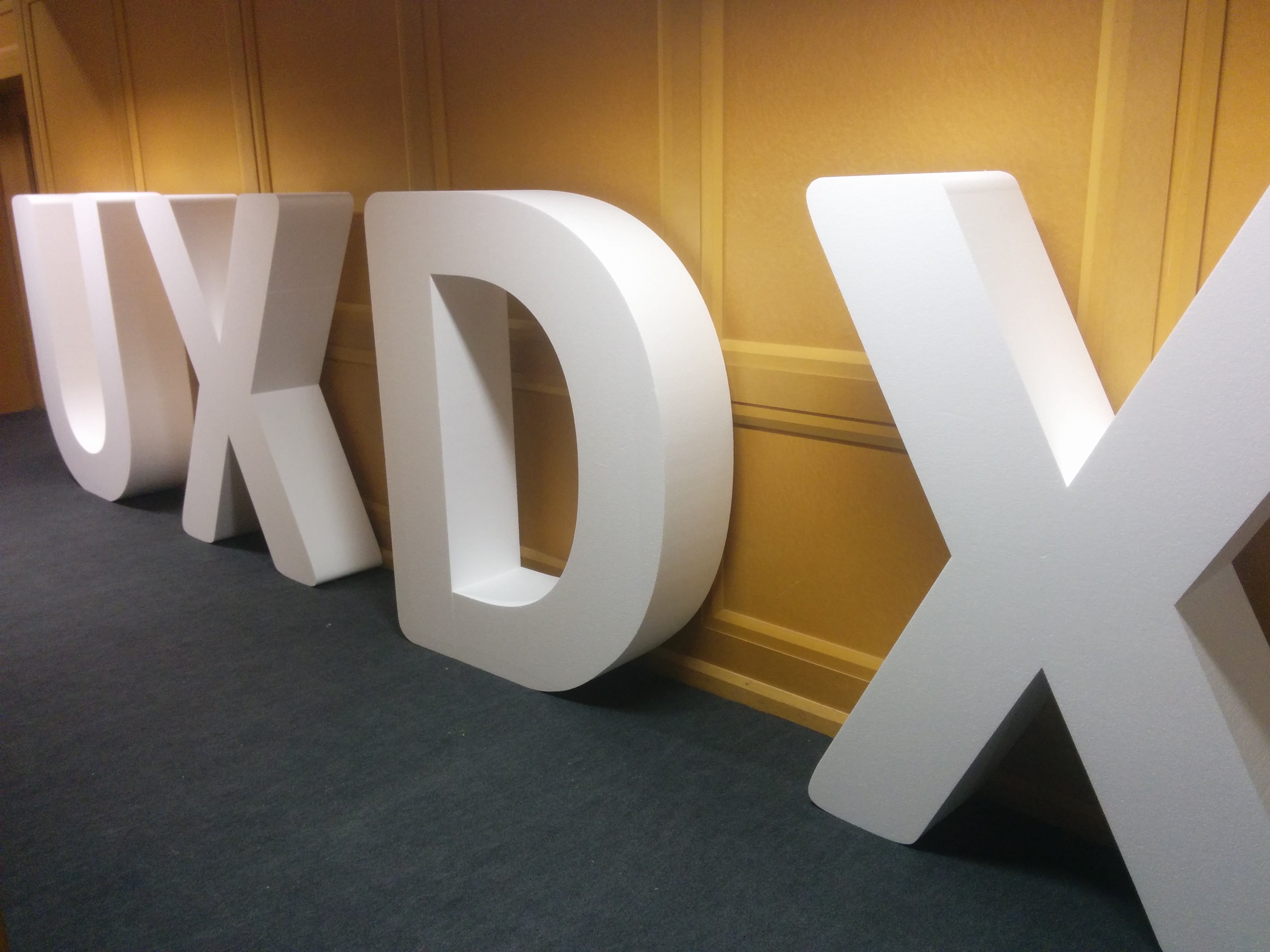 Hopefully you enjoyed the coverage of a few early moments from a wonderful day at UXDX Conf 2016, especially if you didn’t have the privilege of attending.

P.S. Despite restricting the above to just the pre-lunch sessions as a matter of practicality, it would be remiss to omit the closing keynote entirely - a talk given by Kai En Ong, Head of UX & Design of the BBC. She covered a wide diversity of topics, too many to detail here, but she made two interesting points on improving the gender balance in teams.

Firstly, simply count - measuring and talking about the diversity in your teams and on your boards helps bring a focus to the issue. Secondly, and less obviously, is check your job description for gender specific keywords - you can unintentionally bias your hiring process by using language that is coded for one particular gender.